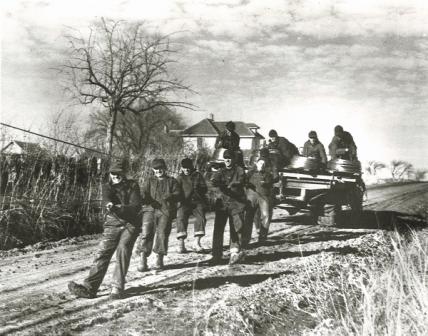 Like rural folks in many states, various Californians began forming small, community-based electric co-ops as early as the late 1800’s. The typical co-op, or “mutual association” as they were sometimes referred to, usually consisted of a small group of neighbors, maybe three or four adjoining farms, or a dozen or so inhabitants of a rural community. Together they dug the holes, set the poles and strung the wires by hand, connecting their homemade electrical systems to a small generator, usually diesel-fired, which would be adequate to power a couple lights for each house and barn, plus a few small motors or other minimal use appliances when the plant was fired up.

Rural electrification really took off after President Franklin Roosevelt created the Rural Electrification Administration (“REA”) in 1935, with Congress giving its official blessing a year later. From that point on the small community systems began connecting their wires together and co-op members worked together to create a movement that truly transformed rural America from darkness to light. A page out of Surprise Valley Electrification Corporation’s history book demonstrates how it happened. One of the small systems Surprise Valley incorporated into its system in 1938 was the Fort Bidwell Electric Company, purchased from a Mr. Cecil Aldridge for $2,650. To get central station power from the co-op, the 75 Fort Bidwell customers agreed to pay an extra 50-cents per month on their co-op electricity bills until the $2,650 was paid off.

During the 1930’s and 40’s there were numerous groups of energized citizens, mostly in rural areas all across California, that tried to start their own, locally controlled electric co-ops. Over a dozen different groups received preliminary loan approvals from REA, and at least half of them became operational and built power lines in rural areas.